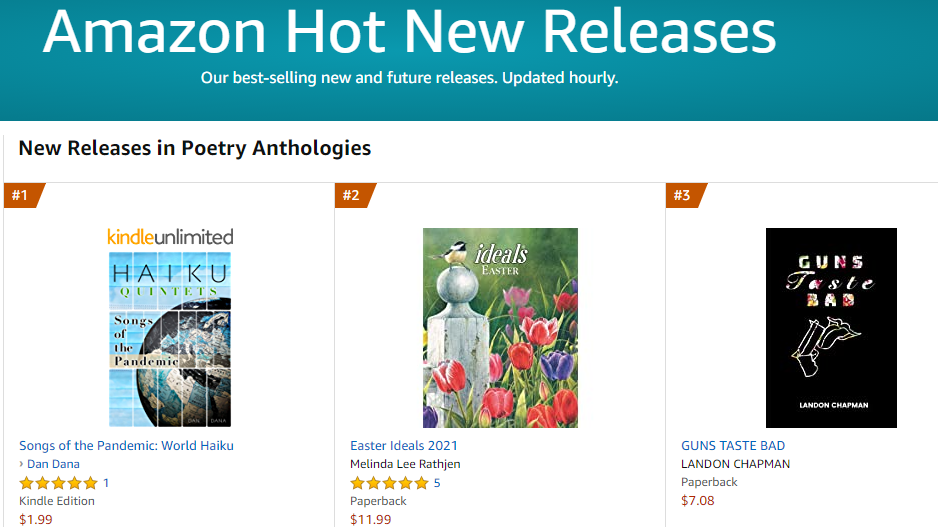 Landon James Chapman grew up in a northern town and now lives in the deep south where he longs for the taste of cold winters and golden summers. He has traveled extensively to China and Singapore and other exotic places in the world, lending to his insight to culture, politics and life.

The Jasper Project, in conjunction with Richland Library, One Columbia for Arts and Culture and Richland Library Friends & Family announced the authors and poets that had been accepted for publication in part II of the combined seventh and eighth edition of Fall Lines – a literary convergence, which included Odysseus, from GUNS TASTE BAD, a selected poem for the FALL LINES publication in Columbia, South Carolina, for fall of 2021, on Saturday, October 16th, 2021.

His poetry examines the underbelly of life exposing hard truths that cut deep, demanding to us to pay attention to world issues like in ‘Soviet Moonshine’ and ‘Guns Taste Bad‘ poems. Flashes of cold winter nights, hard truths and broken hearts are woven into this collected book of poems, GUNS TASTE BAD.

Landon attended college at Lander University in South Carolina and is currently working on his first novel. He is prolific poet that enjoys pipe smoking and speaking more than his fair share and loves his family. He currently lives in Columbia, South Carolina.

“First in Guns, he explores what it is to be a man in a post masculine world.  Then in Taste, he turns inward for soulful introspection. Finally, in Bad, he delves into the personal sorrows of the postmodern experience. Chapman’s poetry is raw, revealing the deeper edges of life.” -Editor Tracy G. Howard

Chapman writes from the depth of his soul, sharing his loss through grief and glimmers of hope, which is sprinkled in his poems like ‘The Factory is Closing.’ He asks the reader to ponder the darker spots on the soul, when it hurts deep. He begs the reader to examine what hurts within from a hard perspective, while sharing generously emotion inside his prose. His prose strikes like a hammer, forcing

the lost, the unwanted, the dejected and forgotten misfits that have lost their glamorous shine?

His poetry asks what happens to a broken soul, the wounded and how can recover when our heart is hidden beneath the shadows and the darker shades of gray.

Guns Taste Bad had a limited release in February 2021 and became a bestseller on Amazon hitting in the top 5 in American Poetry Anthologies.