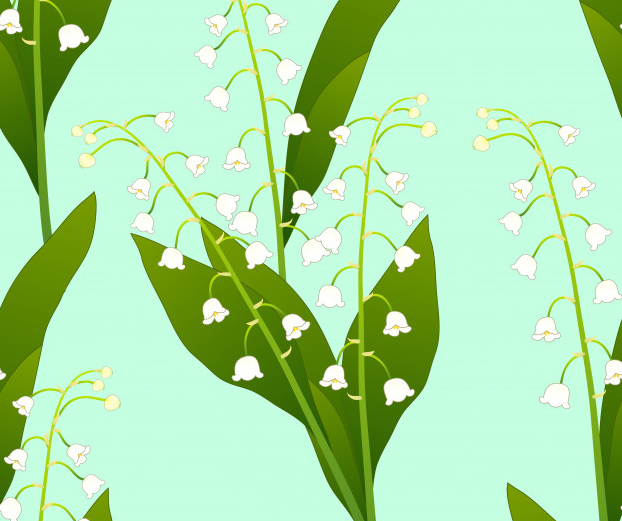 -Thoughts for the Day- written August 2019

I’m in a funky mood today. I’ve been cleaning my closets. I found a journal excerpt, photos of my parents, letters from my high school graduation & some of my first modeling pictures from the 1980s.

What I want to know is how did these items make it this far? What are they doing existing 35 years later? I love keeping greeting cards. I have stacks of them in little boxes from friends and loves ones in countless cupboards and closets from different decades.

I found shoes that are mixed matched, and bags of clothes that have been 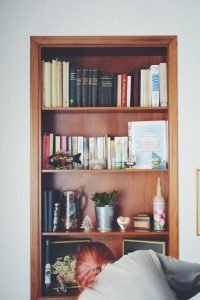 waiting neatly in the garage for donation time. I found a photo of random strangers standing in Houhlihan’s restaurant from San Francisco in 1990, where I was a hostess down on the Pier near the San Francisco Wharf.

I found a photo of myself at Seaworld (early 90s?) petting a stingray in a shallow man-made pool. I found a number to a model friend of mine in 1990 from the concrete days of San Francisco. Her name Donna, from NYC.
We were roommates in a tiny model’s apartment in Pacific Heights near Divisidero street and Pine. My memory is sketching out those long days of my younger 19 years old self, alone in a beautiful city. You could say that was the best foundation laid for the rest of my life. 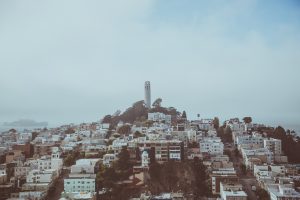 If I didn’t go belly-up in San Fran., then I’ve always known I could only go up from there. I made a living as a model for my first formative years out of high school.

From being selected from the Look of the Year John Casablanca’s Contest to advertising bras for Jones Store in Kansas City, and booking other jobs like for Hallmark, and working with numerous photographers in Northern California, my world at my exact my son is now.

One booking led to another and eventually, I found my way standing under 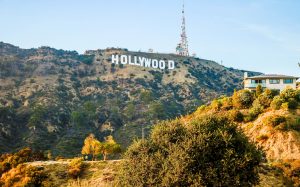 the Hollywood sign just near the Hollywood lake I used to run around (3.5 miles only) and pass Madonna by Lakeside running with her dreadlocks with her bodyguard running next to her; yes this was from the time vault of Immaculate Collection had been released a few years. I kid you not when I say I was listening to that tape cassette (years ago peeps!) when she would run past me. This became almost a 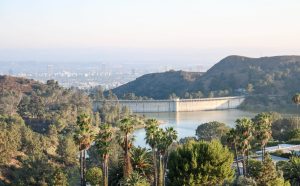 And, if you know anything about L.A., I wasn’t phased, because you figure out actors are just like you and Rock Stars are too, except they are famous and you are more normal than them.

I’ve ventured off from cleaning the closets. This is Word Rant Monday and I am sharing freely as I go. You must know that someday I will have to write about all of the fun, scrupulous times under the palm trees that lined the stars in Hollywood. I will tell you my stories there someday…just not yet. For now, it’s Angels flying off a cliff and an inspirational voice that pulled me to write about that for now.

supernatural moments that can occur at any moment. I loved Billy Graham’s book that I read when I was living in Los Angeles, which is where I thought I had my own angel encounter. Billy Graham says you can ‘t see them, but you can meet an angel if they take on the form of a human being.

I felt like an occurrence just like that happened to me at the Jeri’s Deli in West Hollywood. If I could pinpoint the shift away from the stars on Hollywood Blvd to now cleaning closets in a beach town next to a 22 acre park where I loved to walk my dogs, I could say it was that night at Jeri’s Deli when I met an angel.

Don’t think Gothic big armored, blustery wings expanding fiercely in the wind while the dusk glows upon the breast of  the angel. Don’t think big fat chubby little beating wings that look like a Hallmark card or poorly framed cheap prints of angels dangling mid-air without even a proper back drop to give them flair. Do think normal looking  man with deep blues eyes carrying a Gideon Bible 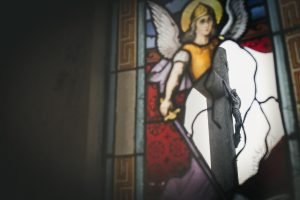 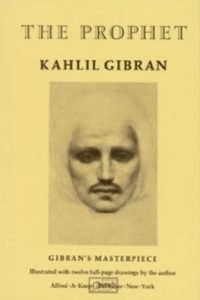 After meeting the angel/regular nice man (whichever he was), I went on a spiritual quest of my own reading everything from James Allen, The Prophet by Gahlil Gibran.

Back when I could call a message from the Power of Positive Thinking center and hear Dr. Norman Vincent Peale’s voice recording whenever my life felt overwhelmed. Back when my little world enjoyed the journey of mysterious jaunts around L.A. that 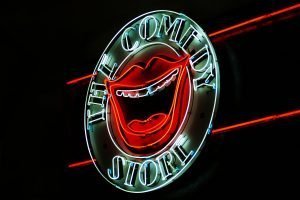 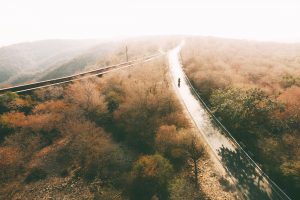 That was one of those magical times in my life where I found the fork in the road and ran so fast down the new path, it took me awhile to figure out I had switched gears to a new world without even knowing it.

What world is that?

What world, to the world I am living now. The one that wanted to be 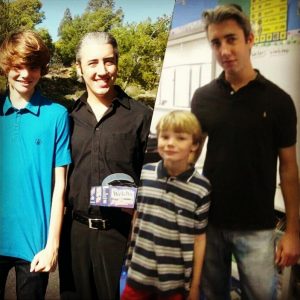 married, remain normal and have a baby, live on a lake and watch the sunset each evening with the man of my dreams.

I didn’t the lake bit, but I did hit the ocean view off on the horizon of my neighborhood…ooh, but my parents did retire on Spirit Lake and it’s one of my favorite places in the world.

I wish I could take you back in a time capsule to see these little guest cabin homes I lived in. They looked like Goldilocks & the Three Bears: small, medium and large sized cabins secluded behind a tall 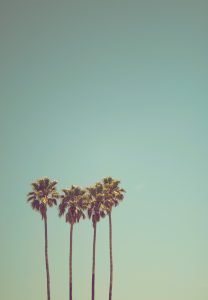 brown fence with a bricked in courtyard, cute shrubs and a few overgrown pine trees behind a larger house in front facing the street. I can touch that time in my mind as if it was almost yesterday. I 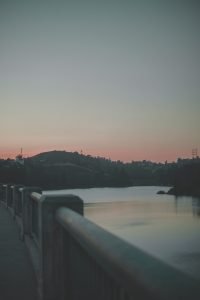 can see my running shoes waiting for Lake Hollywood jaunts…and I loved Madonna, but just not her dreadlocks.

The year I left LA to move to San Diego, I would become pregnant with my son (who is now 19 years old.) He is now paving his own future with his wishes and dreams, while I am still making mine, too.

I think the thing about life and when you are young, you think it will all be laid out nice and neat, as if in a box like the greeting cards I found among many memories. Honestly, life is like a myth, a story or a fairy tale. This journey is all of those things you read, but the story is yours. There are countless chapters with new dramatic setting and friends.

There is a thru-line that carries the Truman Show folks watching from a distance (yes, do insert Angels here or God, or just think of Jim Carey…it’s your choice, really), and the thru-line is YOU. 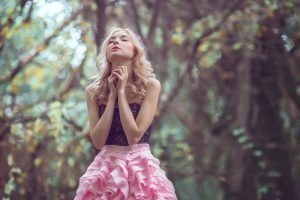 The greeting cards take on different names of those that have loved you and the memories become like too many stored items in the garage that end up donated along with bags of clothes, because ‘What we leave behind, remains with us’ theory is only part true.

At some point in time, there is a moment when you know, that it’s okay to just let it all go.

It’s okay to become the person you were supposed to be back in 1995, but afraid of a coincidental line that hung on your wall and you had read about in a book. You realize you are no longer afraid of being viewed a bit weird for being a mystic at heart.

You are settled down years later. 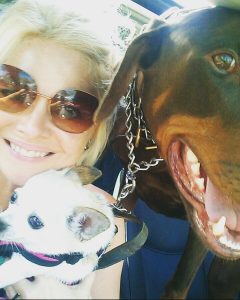 Become a dreamcatcher, rescue  dogs…maybe two, and decide it’s time to write about angels. You’re ready to tell the TALE…but wait, that’s a Gabriel Marquis memoir. So you find the courage to write the book that resonated with your soul so many years ago.

Angels are real. I had an angel experience that changed me in 1995. I writing here to you today because I had the courage to take another fork in the path, inspired by that angel moment.

It’s ok to switch up things, even midstream.

P.S. 20 years ago, today I had my miracle of all take place when I became pregnant with my son through Invitro. My doctor had said, ‘Discard those embryos, not viable by science.’

I had my miracle.

I am so glad I had the courage to take the path that led me to a moonlit evening standing under the stars at French restaurant encamped by eucalyptus trees where I met Robin.